HITMAN™ 2 is the most recent entry to the rebooted Hitman series, which started the well received HITMAN™ (yes the trademark is part of the name) released in 2016. Although on the surface, both games seems almost identical every regard, gameplay, graphics, story etc. (and this is true to an extent); below the surface there has been quite a lot of improvement done to the Hitman formula – many changes which long time series fans have been desperately waiting for. 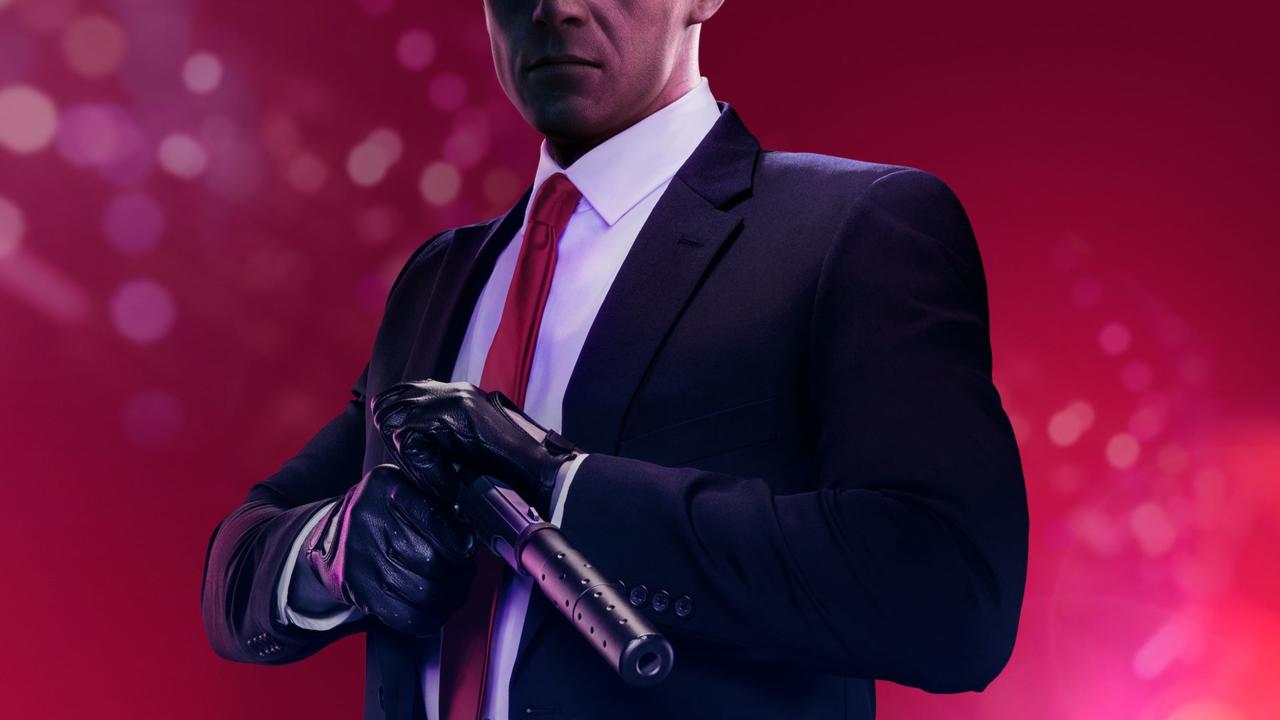 The most obvious and welcome change for many will be the new method of release. Everyone still remember the fiasco that was HITMAN™ 2016’s episode based release schedule. Whilst releasing the game episodically doesn’t sound like too bad of an idea, after all it would effectively force the player to commit to replaying the released levels until more came out – tying in one of the best features of the Hitman series: excellent replayability, it still didn’t curb the disappointment of people who had spent hours downloading a new game only to find the tutorial and a fat notice telling them to wait a month.

After splitting from studio Square Enix, developers IOI now have full control over the methods by which they release their games and have opted with their new publishes, Warner Bros., to release one game. One purchase for all 7 maps. Finally.

Speaking of the 6 new maps, HITMAN™ 2 brings a noticeable change of scale. Everyone remembers 2016’s Sapienza, a glorious fictional Italian town presented in full scale with many fully furnished buildings and countless areas to explore. Unfortunately, the other maps in 2016 were considerably smaller, Paris probably being the closest in size to Sapienza (and that still doesn’t come close). In 2, things are bigger – and bigger means better. Even the first map in the game, the Miami Innovation Race is easily comparable to Sapeinza in scale and later maps like Mumbai far exceed it and are unprecedentedly colossal for the series. More map means more places to explore, more items to find and more disguises to grab. This in turn greatly increases 2’s replayability.

Things have also not just changed in terms of map geography but also in presentation, with a host of new visual changes. One of the first things you will notice dropping in to HITMAN™ 2‘s Miami are it’s stunning bright colours. 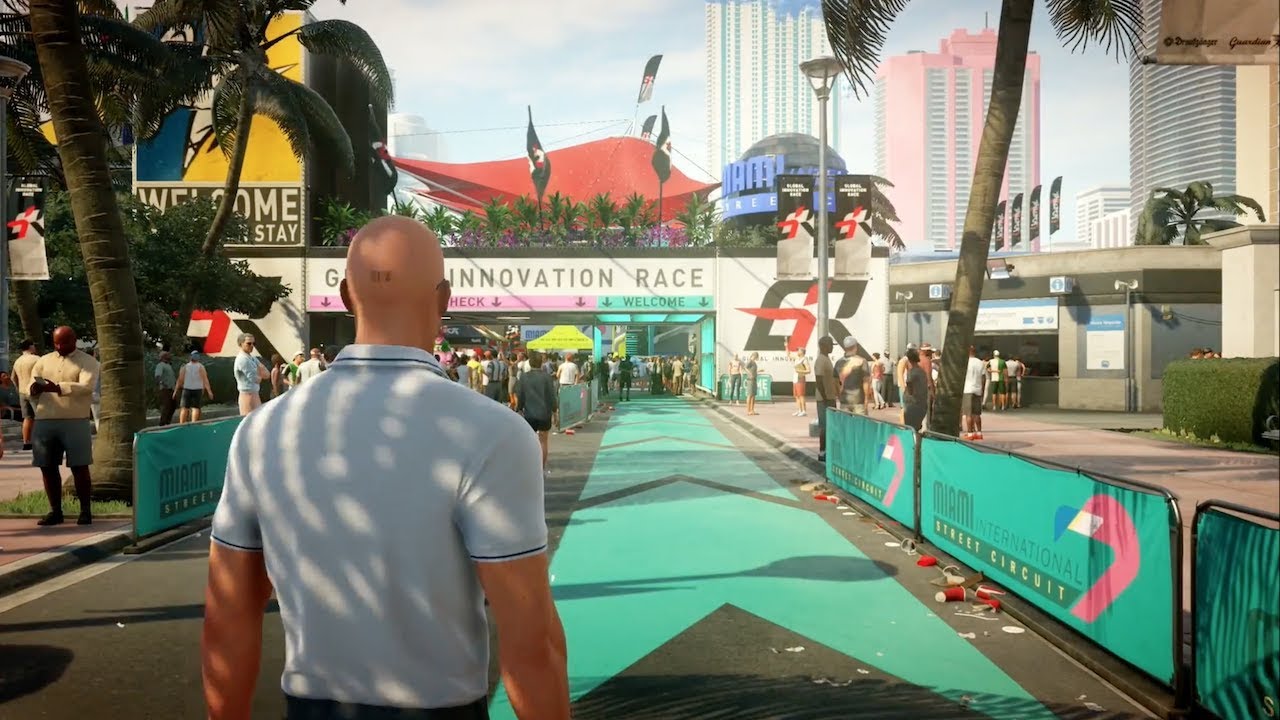 I’m not quite sure how IOI have changed HITMAN™‘s filter, but now all colours (particularly the primaries) are vivid and full of energy. This not only provides a great feast for the eyes, but also assists in the gameplay department: most target’s now wear red clothing, allowing you to spot them for a mile off. This reduces the need to constantly stare at blips on a map to coordinate your deadly plan.

Speaking of maps, the onscreen minimap has changed. It is now higher contrast and noticeably easier to interpret. The whole HUD itself has been changed too, no matching the game’s bright colours allowing for easier reading, extremely important and making it possible to still tell your disguise has been compromised when sprawled across the sofa a good few feet away playing on a console.

A greatly missed feature of Hitman: Blood Money were the on screen live updates as events unfolded. These would cut your screen in two and on one half allow you to continue playing and on the other half, show you something of interest (such as a guard finding a body or a bloodstain etc.). This concept has been reimplimented into HITMAN™ 2 in a far less obtrusive pattern with picture-in-picture. Picture-in-picture shows a small square on your screen (instead of taking up half) with information of interest. This allows you to find out where you’ve made mistakes in your run so on future attempts you can avoid the same pitfalls.

There is also new gear: from new guard rifles and pistols to even proximity stun mines, not to mention the return of the fan favourite briefcase. These create more gear combinations and allow for even more replayability. The backwards compatibility with remastered 2016 maps also allows you to take these new strategies and use them in your favourite HITMAN™ series locations. Sniper assassin mode makes a return from the depths of Hitman: Absolution preorders (although if you’re still interested in the original incarnation of this mode you can read our review of it here) and is better than ever. A new mutliplayer co-op option is added to the mode, allowing you to snipe with a buddy.

This whole revamped sniper assassin mode seems to be a celebration of the sniper rifle, which is new and improved in HITMAN™ 2. Unlike 2016’s HITMAN™guards now react properly to sniper shots, and are no longer able to immediately triangulate your position and sprint over in great numbers to put an end to your run.

There is now, however, another way to send great numbers of guards your way with the reinvigorated security camera system. In 2016, being seen by a security camera would mean an annoying detour to delete the evidence from a PC in a guard room, or just suffering a score penalty. Now, cameras are a serious threat. Being seen holding a weapon or in a restricted area will cause a security alert, with nearby guards being sent to your position. My advice for cameras? Stay well away.

These are just some of the many many additions to HITMAN™ 2, which are certainly greater in numbers than you would believe at a first glance. Together, these new additions make HITMAN™2 one of the best and feature rich entries in the series, and a true contender for the coveted spot of “best game in the series” which has been held by Blood Money for so many years.

This site uses Akismet to reduce spam. Learn how your comment data is processed.

Check out some more of our recent content: Arcadeberry

The Survivalists, the spiritual successor to developer and publisher Team 17’s ‘The Escapists’ franchise, moves the series’ action away from methodical prison breaking escapades and instead offers a more non-linear experience situated on the (almost literal) sandbox of a deserted desert island. Despite a change in locale, can The Survivalists offer the same enjoyable experience […]

Walking around city centres these days it’s easy to see that we’re living in the era of tech start-ups. Almost every corner you see is now populated by cliquey cafes crammed with checked-shirt wearing, latte-drinking hipsters out for a break from their pot-planted desks where they sit on bouncy beanbags, not chairs. What happens, however, […]

It’s a tad ironic that Rogue Legacy, a game all about children succeeding their parents, has taken almost seven years to come out with a sequel; but Rogue Legacy 2 is finally here. Can Rouge Legacy 2, which has recently entered its early access period, manage to live up to the legacy of its well-loved […]